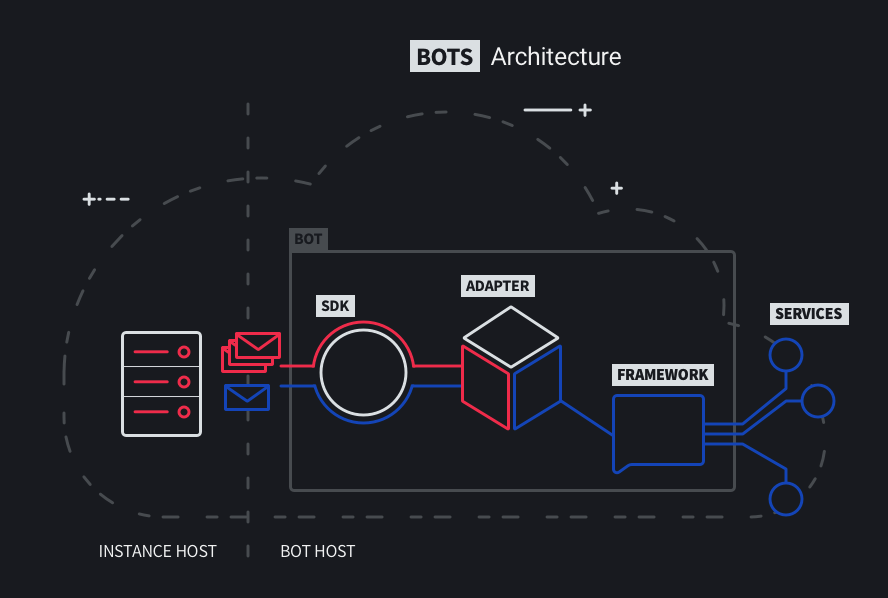 The above diagram illustrates the relationship between a pimentaCHAT server and a chatbot framework or platform. Not all bot frameworks operate the same way, but the general concepts apply. See below for more detailed definitions.

This would apply to external bots. For a definition of external vs internal bots, see the Bots FAQ.

Bots in pimentaCHAT require a user account, with the bot role. Other than having certain specific permissions, they are mostly treated just like regular users within the pimentaCHAT instance. Users with a bot role will also have a “Bot” tag displayed, so they can’t play tricks on us humans.

Admins (and only admins) can create and configure the bot account and role permissions. They set which user fields the bots have access to for privacy and security and the credentials a bot uses to connect. We’re working on better management views for bots and the future potential of user-activated bots.

External bots are either hosted by the chatbot platform or a custom host set up by their creator (e.g. using Heroku, Glitch or Docker). Node.js is a popular language in the space, so we provide utilities catered for Node development, but not all bots run on Node.js.

Every user in pimentaCHAT has a collection for their messages that can be emitted by the server’s streamer. Bots subscribe to the collection of messages for their own user account, creating a stream that is updated every time a message is sent either directly to them or any room they are joined in.

The SDK is a Node.js module that provides an interface for external applications to subscribe to message streams, send messages and call methods on the pimentaCHAT server (via WebSockets / DDP). It would be a dependency of most bots built on Node.js and we’re working on a Python translation as well.

Adapters, sometimes referred to as connectors or middleware, provide the parsing of message schemas and methods between the chatbot framework and the pimentaCHAT SDK. Once loaded into a project, they allow bot creators to compose interactions in the framework’s terms, ignoring the specific requirements of pimentaCHAT.

Bot frameworks such as Hubot, Botkit, Rasa and Botpress each provide unique approaches to composing conversational interfaces. Some run their own hosting for bots, some just provide the code for you to run yourself. Due to the magic of adapters, our architecture is mostly independent to your choice of framework.

Bots often call external services to provide data or conversational processing. This is conducted from scripts implementing the bot’s framework utilities, whether it’s the bot’s own platform provider or NLP service, or some other API, like a weather service or your own business logic provider.

Contribute to our growth with your feedback